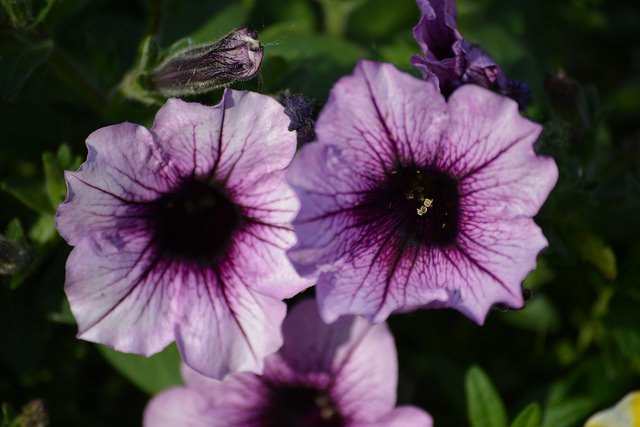 The petunias above have quickly earned my favor in this year’s garden. A garden full of petunias and its petite cousin calibrachoa is a somewhat lazy choice, but they can provide reliable color and joy for nearly half the year.

Since I am apt to think in tangents during most of my waking hours, I present a photo which reminds of a Stevie Nicks’ album title, The Other Side of the Mirror: 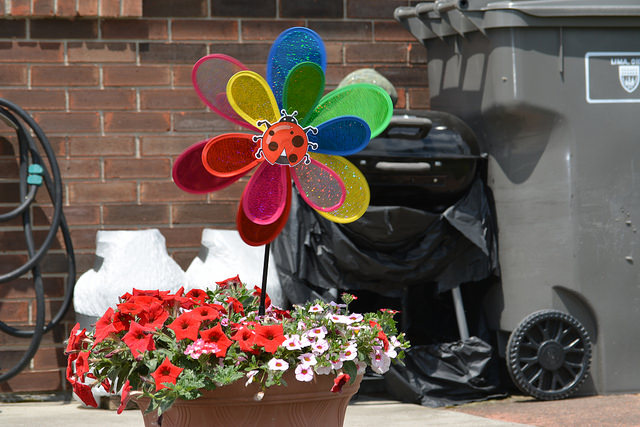 Once upon a time, such a title could evoke all sorts of feminine mystery. In my teen years, I’d imagine that the other side of the mirror held a land full of light-hearted witchcraft and Adonis-like suitors who’d ignore the perfectly preserved plush animals of one’s youth that would punctuate the decor of your lair.

In the picture above, you see the things lined up against the back of the house, a hose imperfectly wound along with spare propane tanks and a grill in need of a new cover. Then there’s the trash can, which I suppose is the terminal expression of that other side of the mirror, the footage left on the cutting room floor of daily living.

As for the pinwheels that have appeared in the garden, they are part of a small bounty of items my husband bought at an antique tractor show a couple years ago. It seems that most gatherings related to old but useful things have vendors selling all sorts of items. In the sweltering heat, he found a booth selling all sorts of pinwheels, and it wasn’t until this year that we got around to placing them in the garden. Unfortunately, we’ve had some wicked wind lately that dismantled a couple of them.

I will close this post with a few more images from the garden: