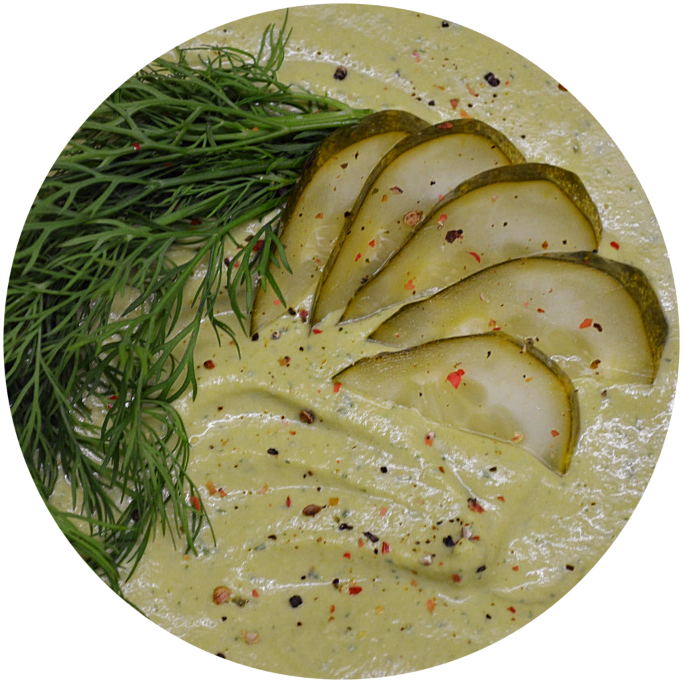 When I think of hummus, one of the few latin phrases I know comes to mind, ne plus ultra: there is nothing greater. To my palate, no other dip approaches the glory of hummus, which I’ve enjoyed for 25 years. The classic combination of garbanzo beans, tahini, lemon juice, and garlic tastes so divine that I hesitate to justify a departure from it. I have read so many well-reviewed recipes for variations on hummus that it may be a blank canvas for all sorts of culinary adventures.

Today I tried combining hummus with another of my favorite flavors, refrigerator dill pickles. I’d recommend using a pickle you love. I’ve added pickles to enough recipes to know that it’s best to use a pickle you enjoy by itself. This pickle principle is parallel to the advice of cooking only with wines you like to drink. Otherwise, the finished dish could disappoint your taste buds. I’ve put hummus on sandwiches with pickles often enough that I guessed the combo could work in dip form. It has decent tartness that doesn’t mute the umami of the tahini.

Place all ingredients in a blender or food processor and pulse until smooth. Taste and season with salt and pepper. Serve with cut vegetables and crackers.

I love whole grains so much I dreamed of one last week. My dreaming mind watched a cooking video which claimed that quinoa was cooked incorrectly if any of the “tails” were hanging out of the grains, and the riddle of how to keep these strings tucked into each tiny pearl boggled my mind enough I woke up. Could I keep them from being unruly through a low, vigilant simmer, or was the secret the addition of an acid at a strategic moment? Then I considered that both the premise and concern of this challenge were false. In my waking life, quinoa is done when it looks undressed, and the only person in the house who will eat quinoa, yours truly, is very easy to please regarding whole grains.

One whole grain I enjoy more than quinoa, which has been become as overexposed as the Miami Sound Machine in 1985, is farro. It is an ancient relative of wheat, and it tastes like a lightweight cross between bulgar wheat and barley. Its husk offers a satisfying snap when bitten, and its interior is soft but not mushy.

Today I reminisced about how I used to make tabbouleh with a boxed mix from the Near East company back when I lived in Washington around the turn of this century. I was bold enough to make hummus at home, but I didn’t feel confident enough to make falafel or tabbouleh without leaning heavily on a boxed mix for both of them. Once I moved back to Ohio, I left my dabbling in these dishes behind. While I loved them, they reminded me too much of a place I endured solely through food and cooking. I had an oven in the wall just like Alice in The Brady Bunch, and I challenged it often. My sense of the Puget Sound is darkened only by the personal drama of my time there. Otherwise, it is a lovely place, stunning in its physical beauty and exhilarating in the variety of its cuisine.

My farro salad was born today in tribute to tabbouleh. I need to buy some bulgar soon to attempt this grain salad in its proper form, but today I had a bag of farro I wanted to use up. This is the first time I’ve ventured into cooking with fresh mint. Oddly enough, I had a tragicomic encounter with mint twenty years ago that made me reluctant to try it again. I had grown a mint plant in a foot-wide pot situated on a balcony garden. This “balcony” was actually the flat roof of a one-car garage below. By the end of that growing season, the mint plant had so overtaken that pot that its roots cleaved the pot in two on the bottom. I figured the mint would not overwinter in a pot in zone 5, so I tried to empty the pot. The pot felt impossibly heavy. After pushing the pot a few inches, I planted my foot on the damp patch of rooftop I’d just exposed. Next the roof gave way beneath me and I had one leg dangling into the garage below. I have only my hearty thighs to thank for keeping me suspended in midair and not impaled on the shovels and pitchfork below.

I clawed my way back to the roof and knew that I’d need some time away from mint in all its forms. I revisit this herb for the first time in twenty years with this recipe.

My last addition was sugar, a concession that does not hearken to tabbouleh. I didn’t think to add it at first, but a touch of sweetness really unlocked the flavor of this dish.

Juice and zest of one lemon

Whisk together oil, lemon juice, zest, vinegar, salt, sugar, and pepper in a large mixing bowl. Stir in chopped herbs, onion, and garlic. Let rest for fifteen minutes for flavors to blend. Add cucumber, tomatoes, and farro. Stir until well combined. Chill in fridge for a half hour. Top individual servings with parmesan cheese and extra herbs to taste.

The farro mingles into the scene

The dressing with all the herbs and vegetables 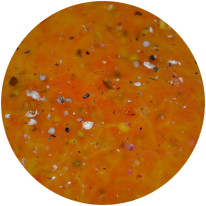 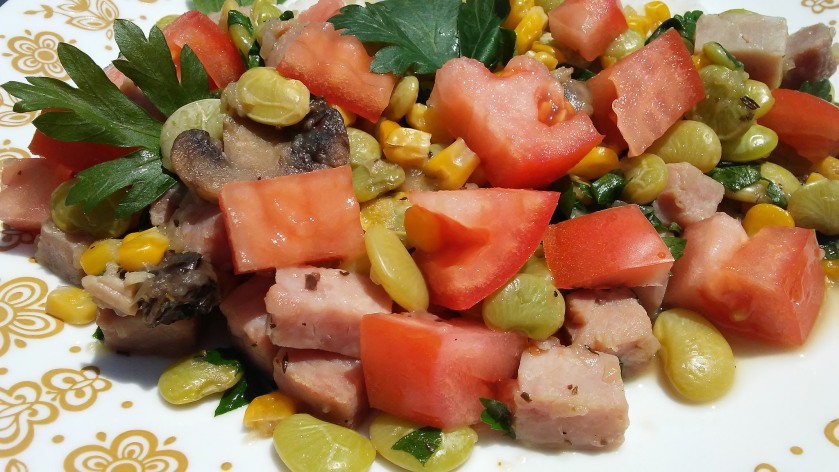 This recipe is my take on Cooking Light’s Edamame Succotash. It’s one of those simple recipes that value whole foods, and it looks as if can be adapted liberally to suit a wide array of preferences. I prefer lima beans to edamame. While canned lima beans are infamous for adding a bitter note to mixed vegetables, the dry and frozen forms have a neutral flavor and smooth texture that yields well to seasoning.

I should mention why I decided to blog about what I’m cooking. I have a tendency to make a dish differently over time based on the contents of my fridge and pantry. My husband suggested that I start making notes of how I’d made a dish a particular time it turned out well. For someone as disorganized as I am, a blog is an ideal place to record recipes.

Writing about cooking also honors a task that it is vital yet so undervalued among tasks done day to day. When there is no record in writing or photos to show what I’ve done in the kitchen, it is all too tempting to strip meaning and purpose from all the time I devote to this kind of work. When I click through my recipes here, I am reminded that my time has value, and time spent on cooking is not wasted.

By the way, ham isn’t necessary to this finished dish. It could taste intriguing with a pound of shrimp or chicken instead. The beans provide a decent amount of protein, so the meat can be omitted entirely to create a vegetarian main as well.

Melt butter with olive oil in a large skillet over medium high heat. Add onion, shallots, mushrooms, salt, and pepper. Sauté for 5-7 minutes, until onions are transculent. Stir in corn and let sit for a minute or two over the heat so the corn browns just a little. Pour in stock, add bay leaf, and sprinkle in thyme. Add lima beans, turn down heat to medium and let the mixture simmer for ten minutes. Stir in ham and vinegar and heat five minutes more. Remove bay leaf, sprinkle parsley and tomatoes over all, and serve over rice.

As I’ve been breaking in my new ice cream maker, I’ve noticed that none of the dairy mixtures I’ve tired have surpassed the smooth, impossibly tiny ice crystals I’ve achieved by pulverizing frozen fruit in a blender. This evening I decided to find out what would happen if I tried to make ice cream with a banana base (a technique described well at Bowl of Delicious). Apparently, the pectin in frozen bananas lends itself to a custard-like creaminess when processed into smoothness with a blender or food processor.

No ice cream maker is needed to make this recipe. It has just three ingredients. Any frozen berries can be used in place of the raspberries if that it is not your preferred “jelly” flavor.

Place bananas and raspberries in blender or food processor. Pulse until smooth, stopping and stirring several times so all of the fruit has a chance to be chopped. Add half of the peanut butter and pulse until it disappears into the fruit mixture. Empty mixture into a one quart freezer container and stir in the rest of the peanut butter, leaving ripples in the ice cream. Freeze for at least two hours to harden for serving.

I could have titled this post ice cream experiment number four. Attempts two and three were valuable solely in teaching me firsthand what not to include in an ice cream recipe. Number two proved to me that fat free half and half produces a treat akin to the low budget ice milk of the 70’s that no one missed when it disappeared from grocery stores for good. Trial three taught me that ice cream does need some fat and natural sweetener, unless one has access to industrial strength churning facilities. I so wish I could report that I’d created a decent recipe for 30 calorie ice cream, but my daughter assured me that my mixture of unsweetened almond milk, espresso powder, and sucralose tasted like misery. That combo was so awful that I deleted my pictures of it because the memory of its flavor made me shudder.

This evening’s attempt was free of such calorie conscious nonsense.

2 cups half and half

Stir together all ingredients with a whisk until sugar is dissolved. At this point, the mixture can be poured directly into an ice cream maker, but I recommend pouring it first into a blender and pulsing a few times to make it smoother and easier to churn. Churn in ice cream maker according to manufacturer’s instructions. This ice cream may be enjoyed freshly churned with a soft serve style consistency, or it may be hardened in the freezer before serving.